The following article was originally featured in Ventilator Assisted Living.

At the age of three, I didn’t pay much attention to the world around me, other than what I could play with. Everything changed though when my family was in a car accident one February morning. Now, as a C2/3 vent dependent quadriplegic, the world was a completely different place.

In 1985 it was unimaginable for a child with my injury to return home and live in mainstream society. My parents knew living in a care facility wasn’t in God’s plans for my life, so they did what the doctors never thought would work and brought me home.

Getting used to having a nurse with me 24 hours a day and using a mouth stick to play didn’t take me very long. When I started preschool about a year later, I was ready to learn just like my classmates.

School continued just like every other boy, only with a few unique tools. In first grade, a substitute teacher had us rolling dice as part of the lesson. She quietly came to me and said she was sorry that I couldn’t participate. I quickly corrected her by showing that by pushing down on one end of the die, it rolled very well if my assistant caught it.

One area in school I didn’t like was physical education (PE). When my classmates ran around the gym, I could easily follow by driving my power chair with them. With other activities though, like baseball, basketball, I had to sit on the sidelines. I was made a referee or base manager, but not directly involved with the rest of the class.

In the summer of 1993 my parents, a caregiver, and I took a long drive from our home in Iowa clear out to Ohio to attend CHAMP Camp. This was a camp for kids just like me; everyone had either a vent or something they used at night to help them breathe. Some were fully ambulatory while others used a wheelchair to get around. I had been to a similar camp a few years earlier in Miami, FL, but this one was different. One big part was that after my parents dropped me off, they were gone for the week!

There were two other quadriplegics there and we became friends within minutes of arrival. One of them though, didn’t live at home; he lived in a hospital in Indianapolis, IN. The people that started the camp, Dave Carter and 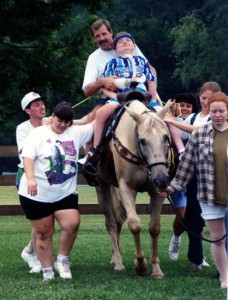 Nancy McCurdy, worked at the hospital and thought kids like us should have a camp just like every other child.

A great part about CHAMP Camp is that everyone participates in every activity. You have time to watch your friends, but when my turn comes, I did the activity! I got to go fishing with a pole I could operate with my chin, swimming in the pool by laying on a floating mattress, riding a horse, and a lot more. The best part was the last night we were there.

All week, pranks had been going back and forth between the boy’s and girl’s cabins. My friends and I helped to instigate a few them, with willing counselors to help in our schemes. On the last night, after closing ceremonies, was a squirt gun fight between the two cabins. I had more fun in a few short minutes than all the things I had ever down outside of camp. I was hooked from that time on.

Camp was held at Recreation Unlimited and the following years saw more activities added to the grounds. I couldn’t wait to go back and see my friends and have a week of fun. New activities included climbing a 25 foot tree and later on a 50 foot tower. A ventilator with 40-70 feet of tubes was stationed on the ground and you were hoisted up by a system of pulleys in a special seat. A counselor went along with me, an ambu bag, and camera, and up I went. It was great seeing the bird’s eye view of everything around.

In 2000 I graduated from high school and no longer qualified to attend CHAMP Camp as a camper. I still greatly enjoyed seeing all my friends and working with the younger kids, so I came back that year as a counselor.

When I was a camper, I did not have to bring my own caregivers, the counselors took over that job. As a counselor, I had to be independent in my own care, so that meant taking two to three of my caregivers from home along.

Seeing all the prep work before camper arrival was something I hadn’t experienced. We first started with all the counselors learning about every kid that was coming. Each individual cabin then took more time going over our children’s needs in detail, meds, daily routine, fears, and everything else. With the majority of the staff being nurses, RT’s, nursing students, and other medical professionals, the camper’s cares were well covered. After two days of training and working with each other, we were ready for the kids.

Part way through the week one of the campers received a letter from home. As soon as he saw it, he ran up to me so I could read it for him. We got it arranged that he held it so we both could see and all was good. Later in the day he and a friend came up to tell me a joke they just learned. It was one I had told for years, but I still listened to both parts and made sure to laugh at the end.

Except for a few friends at home, kids hadn’t ever come to me for help with anything. This helped to confirm that I wanted to continue to come to CHAMP Camp and work as a counselor.

I missed two years for college, but from 2003 through 2011 I was able to come every year and work with kids. In 2011, CHAMP Camp moved to Bradford Woods near their home office in Indianapolis. I loved the drive being shortened by several hours and no longer needing to stay overnight on the trip.

At Bradford Woods, we have smaller cabins and can work with the campers more closely than in Ohio. The grounds are again well suited for wheelchairs and with a larger lake, we can do more water activities and we now spend an entire day at the lake. In 2014, a new activity of a zip line was added to the list the campers get to experience.

Due to health and funding issues, I have had to miss a few years of working at camp. However, I keep in regular contact with my friends through Facebook and other means. A few of my friends from back in 1993 have gone on to their heavenly home, but others, like me, have been able to go into the working world and give back to camp.

Along with my parents, CHAMP Camp has been a major role in helping me become who I am today. Learning independence from my parents helped me through the years I lived on my own in college. Working with kids helped me to do disability awareness talks at local grade schools. Technology changes throughout the years have enabled us to do more than we could imagine when I started.

Kids that were formerly unable to communicate verbally now use various speaking systems that allow them to chat with their new friends. I now use a Diaphragmatic Pacing System (DPS) instead of a traditional ventilator.

If you have a child age six to high school graduation who uses mechanical breathing, I highly recommend CHAMP Camp. It is a unique experience that is a great opportunity for those involved. For one week out of the year, we get to leave the real world behind and just be a regular person. It’s something I hope to continue to do and see kids enjoy for many years to come.