Campers in the News 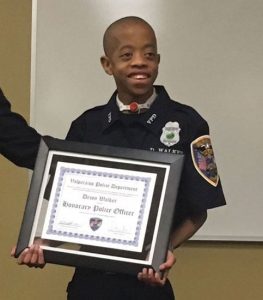 Dejon is a senior at Valparaiso High School this year and has been a great friend and supporter of the Valparaiso Police Department. Dejon’s father was murdered when he was four years old and he has battled health issues throughout his life. However, that has not stopped him from pursuing a lifelong desire to become a police officer.

He has attended and graduated from the Valparaiso Police Department’s Junior Police Academy and is currently attending the Wheeler High School Criminal Justice Vocational course.

Dejon has been a great supporter of the Valparaiso Police Department and gotten to know many of our officers over the years. He is well known to many officers.

Officers brought the idea of a ceremony to recognize Dejon to retired Police Chief Michael Brickner and the process began. Prior to retiring, Dejon and Chief Brickner traveled to a uniform store and Dejon was fitted for an auxiliary police uniform. Chief Balon continued the process and conducted the ceremony last night.